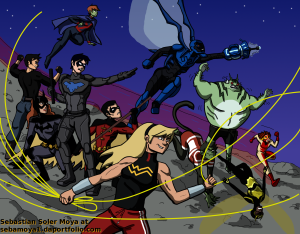 Young Justice is a cartoon starring DC Comics‘ teen superheroes on covert missions, and it is pretty great.  I know quite a few people who say it’s the best version of the DC Universe out there right now…  Here are some reviews from the Onion’s AV Club if you don’t believe me.

I made the top drawing a while ago, but since Season 2 skipped ahead five years and introduced a bunch of new characters, I just had to make the companion piece…  The bottom one was done much more quickly, so it’s interesting to compare them now, especially since I wasn’t making that much art in between…  not sure if I’ve gotten better or worse : P