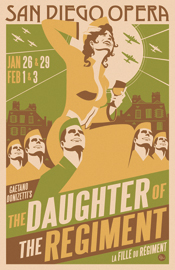 Sorta late on the bandwagon, but I’m loving San Diego Opera‘s posters for their 2013 season, created by a graphic artist more commonly associated with grassroots protest movements, R. Black.  An outside-the-box collaboration that proved fruitful!  There’s even a tenuous comics connection, since Dark Horse published a book of his work!

Back to the opera, SDO doesn’t seem to be the most adventurous house as a whole, but they did present two pretty unique operas this season…  One was Ildebrando Pizzetti‘s rarely heard 1958 Assassinio nella Cattedrale, based on T.S. Eliot‘s play on the 1170 assassination of Thomas Becket (aw yeah, medieval English history through an operatic Italian lens!).  The other was the world’s first mariachi opera, Cruzar la Cara de la Luna by José Pepe Martínez, director of Mariachi Vargas since 1975. 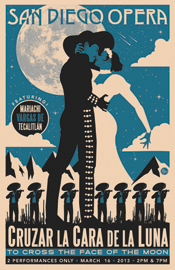 Both pretty rare, highly anticipated pieces, both well–reviewed.  Despite their rarity, it’s now possible to hear them both on Spotify!  Cruzar la Cara de la Luna was recorded at its Houston Grand Opera premiere, and the Pizzetti is represented by two recordings (I’d checked before, so these are new…).

Here’s the full first act  of the 1958 premiere performance of Assassinio nella Cattedrale from Spotify: