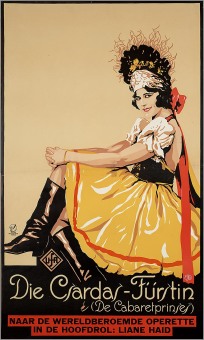 Gipsy Princess poster from The Memory of the Netherlands digital collection

In the latest case of me learning about something just hours before it’s set to start, Medici.tv will be live streaming a special New Year’s performance of Emmerich Kalman‘s 1915 operetta Die Csárdásfürstin (aka, The Gipsy Princess for those non-Hungarian speakers among you) from Staatskapelle Dresden with the powerhouse duo of Anna Netrebko and Juan Diego Flórez.  You’ll need an account to see the live performance, but it’s free and pretty painless!

Here’s an old school televised version of a duet from the Gipsy Princess in all it’s glory:

Operetta seems to be an old world New Year’s tradition, and the Met Opera is getting in on the game with a new production of Franz Lehar‘s Merry Widow premiering on Wednesday, New Year’s Eve!  So get your operetta fix this week!

Remember when I ironically posted about EuroVision and their crazy Romanian vampire countertenor?  Well joke’s on me, cuz Florin Cezar Ouatu (aka Cezar the Voice) has entrenched himself into the operatic world by somehow becoming Mr. Gheorghiu.  Yeah, that Gheorghiu.

Internationally renowned, diva-tastic Romanian soprano Angela Gheorghiu has apparently been a champion of Cezar‘s since the start, introducing him on Romanian TV back in December of 2012:

And now that they’re the out & proud new Romanian opera power couple, they went back on Romanian TV to sing La Barcarolle, famous duet from Offenbach‘s Les Contes d’Hoffmann, with the traditionally mezzo part taken on by Cezar.

Hats off to you Cezar, you’re really set for life now.

The story is inspired by the real-life 17th century Peruvian singer (and mistress to the Viceroy) Micaela Villegas.  So in addition to opulent costumes like the one above, costume designer Suzanne Fabry also got to design some altiplano cholita costumes…

NYCO and director Christopher Alden‘s production leans a little more modern (and Mexican), but it looks like a riot!

So I saw The Turn of the Screw at New York City Opera and it was sooo great!  Everything I’d hoped for and more.  The updating to the 1980s worked great, the set was neat (even if it could’ve stood to change a bit more for certain scenes), there were some wonderfully creepy ghost-related stage pictures, and most importantly of all: the music, story, and performances were just spectac’.

But when soprano Lauren Worsham (below) who, despite being 30 was great as the skittish child Flora, came out for her bow in an oversized purple ’80s sweater, what cartoon character did she remind me of?

Photo credit Richard Termine (who has an opera section in his portfolio!)

END_OF_DOCUMENT_TOKEN_TO_BE_REPLACED

Very short notice, but just in case…  Opera Lafayette, devotees of French opera from the Baroque to the Comique, have a one-night only NYC performance tomorrow night of Félicien-César David‘s 1862 orientalist operetta Lalla-Roukh.  It’s part of Opera Lafayette‘s ongoing rediscovery of the repertoire of Paris’ Opéra Comique.

Further down the line in May they’ll be performing Baroque composer Marc-Antoine Charpentier‘s 1685 Actéon, but in their home base of Washington DC only, so plan ahead if that is of interest to you.

I’ve repeatedly mentioned how this year has been a big one for operatic anniversaries;  bicentennials of Verdi and Wagner and a centennial for Britten (born on St. Cecelia‘s Day, appropriately enough!).  Well, some people are gearing up for another centennial five years in advance…

Leonard Bernstein was born in 1918, and the Leonard Bernstein Office in New York is now fielding submissions for a logo for his centennial.  Information on competition guidelines are here, and the last day to submit is January 31st, 2013.  Any creative followers out there get cracking!  And definitely share your submissions with us!

(PS: If you came through Facebook, the photo of Bernstein appearing in that status update is by Jack Mitchell; credit where it’s due!)

Wow, I’ve had quite a comics-heavy run lately, so let’s ease the transition with some opera-themed illustrations…

Somehow I stumbled upon the season illustrations for the Opéra Comique in Paris, which are adorable.  They’re by Guillame Dégé, and I don’t know what vegetables have to do with any of the operas, but I’m loving it.

The line-up is quite interesting too, with about half baroque repertory and half early modern repertory, but all pretty off-the-beaten path.

For example, I’d heard of Reynaldo Hahn ever-so briefly as a composer of song, but he wrote opera too!  Lucky for us, his 1923 operetta Ciboulette is up in full on YouTube:

Link to part two.  ( Also, get this: Hahn was born in Venezuela to German-Jewish and Spanish descended parents, and was maybe in the closet, so a Hispanic, Jewish, gay, immigrant?  Jeez, quadruple minority threat. )

I had never heard of Henri Rabaud though, but he’s there too, with the delightfully orientalist sounding Mârouf, The Cairo Cobbler, drawn from The Arabian Nights.  Opéra Comique gave its premiere in 1914,and and it even made it to thMetropolitan Opera by 1917, so it had its moment.  Here are some orchestral dances taken from the opera: